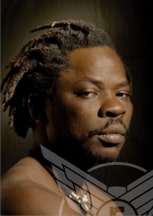 A self-proclaimed African Price, intent on carving his own little nation from the bloody underbelly of the African crime world. Miwani is apparently responsible for numerous kidnappings for ransom, murder, slavery and other crimes inflicted in innocent people, drug trafficking and production, weapons dealing and tax evasion.

Despite, or perhaps because of his brutal public profile, he commands extreme loyalty in his people. There’s very little anyone from the outside world can do at present since Miwani has central Africa largely under his thumb.

Recently rumours have been circulating that the majority of the ‘crimes’ Miwani is apparently responsible for are fiction – deliberate constructions intended to create fear in Miwani’s opposition. This has of course been denied strongly, and Miwani himself replied by publicly executing a member of his rivals group personally, with a machete.