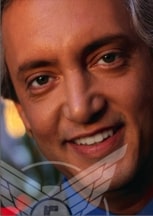 Interpol officer Pierre-Louis was once a family man with a solid career and good prospects. In 2007, The Mangler escaped just before his trial and Chevalier was one of the officers tasked with bringing the criminal in. The hunt lead across Europe and into Africa, where the trail grew cold.

Something happened to Pierre-Louis along the way and he returned to his home in Paris a changed man and refused to speak to anyone about what happened to him near Sudan, the location of the last reported sighting of The Mangler. The relevant Interpol reports have been sealed under the organisations highest level of security, and Chevalier’s team was reassigned, though he himself refused a transfer and still hunts The Mangler to this day.

Unfortunately, Pierre-Louis has lost almost all of his friends and family along the way. His single-minded determination leaves little room for anything. Only the capture – or death – of The Mangler will allow Chevalier to rest.