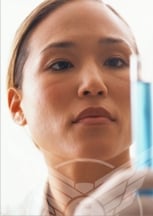 After her initial thesis was widely panned by her peers she has found it difficult to get grant money to continue her research. She is irritated that her work has been mis-quoted, and that her full hypothesis is more complicated than simply “alien plants are on Earth” – which is what the media is fond of quoting alongside her photo.