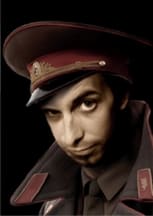 Saiem was a General in the Ukranian military during the 1990s. He vanished from active service records in 1999 and reappeared running a covert operation into Georgia late in 2004. He once more vanished until his recent appearance as self-styled “Autocrat” Warlord of the new breakaway ex-Russian Federation country Usrekistahn.

He is presently making waves in the U.N. after allegations of assassination and under-the-table dealings dogged his rise to power. As yet he has made no overtly aggressive moves towards neighbouring countries, and his well documented foreign policy is often quoted as being, “If they leave me alone, I’ll leave them alone”, but many governments have grown concerned about the apparent build-up of military hardware (most of it ex-Soviet hardware purchased on the black market).