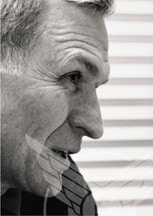 In 2007 several people came forward pursuing a court case against Protekorp, Matherson’s employers at the time, for “illegal human trials” taking place in Lab 221. Matherson was named in the case. After his arrest he was broken out of jail by an armed team and hasn’t been officially seen since, police in Germany, America and France have a standing warrant for Materhson’s arrest although conspiracy theorists suggest that they have turned a blind eye after large cash payments were allegedly made.

It’s widely rumoured that the new exclusion zone established by the C.D.C in Alaska is the result of a recent failed attempt to re-capture Matherson. The Doctor has not been officially sighted, although Pierre-Louis Chevalier, former Interpol agent, has been spotted in Sibera recently – again there are only rumours to go on, but it’s whispered that Chevalier is hunting Matherson and has been for some considerable time.