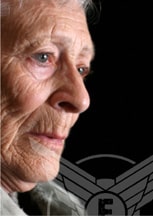 Once the beautiful trophy wife of ‘The most dangerous man in organised crime’, now a grandmother and widow. She was never charged with anything more serious than possession despite the fact that her deceased husband was eventually incarcerated in Italy under a life sentence.

Rumours persist that she now runs (and possibly always did) the crime syndicate known as ‘The Gentlemen’s Club’. Despite many private investigations and several extensive police investigations over the decades, no evidence has ever been discovered that she took over after her husband’s imprisonment and subsequent death.