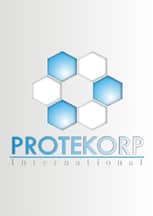 Officially founded in 1843 as Proteische Korporative Internationale Hervorragende Leistung, a joint venture between Swedish, German and Belgian investors; it was one of the first businesses to take advantage of the new industrial manufacturing techniques becoming available across Europe.

In the early-1930s Protekorp’s head office (and most of its assets) relocated to Switzerland, prompting post-war questions about exactly how much the board of directors knew about the coming war in Europe. The late 1980s saw Protekorp rise to a position of global dominance for the first time, and by the late 1990s the Protekorp portfolio listed over 250 subsidiary companies and a further 390 ‘investments’ in various organisations.

Today Protekorp is the most famous name that no-one has ever heard of. They produce microchips, fabric, food, clothing lines, consumer goods, vehicles, pharmaceuticals, weapons and everything in-between. It has been said that if you strip down any single item in your home to bare components, you are guaranteed to find that at least one or more parts are manufactured by Protekorp or one of its many subsidiaries.

It is rumoured that Protekorp have wide ranging contracts with the U.S. Military to develop weapons, equipment and vehicles for the next generations of armed conflicts. Despite what must be a vast income from its weapons development, according to the official figures Protekorp still makes most of its money from pharmaceuticals.