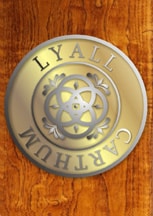 A British-Canadian enterprise established officially in 1982 by Charles Lyall and Sandra Carthum. This solidified an unofficial merger that occurred at some stage in the past (details are unclear), saw both individual companies through rough times without a scratch.

The Lyall-Carthum Conglomerate is not considered a corporate entity as such, since it is relatively small with a relatively small turnover. It does not produce consumer goods or have factories. Its founders describe it as a ‘research foundation’ which makes its not inconsiderable wealth from scientific breakthroughs.

Despite its size, it seems that in recent years the Conglomerate has been gaining more notoriety in certain circles. Recently the Lyall-Carthum Conglomerate has appeared in the daily summaries of both the British and American leaders, though with no definite facts and a maddeningly vague paper trail, it’s difficult to form any solid opinions about the organisation.

What is clear is that they annually donate around five hundred million dollars to various charitable organisations, mostly those involved with health – Alzheimer’s research, cancer cures, stem-cell research, etc.