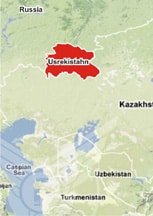 A recently formed tiny self-governed nation which has yet to make a full appearance on the world stage. Its formation was largely ignored by the world’s media, although most intelligence agencies were keenly watching the events.

General Rasputin Saiem liberated several small towns from ‘oppression’ – though from whom is somewhat unclear. He then negotiated deals with Russia for territorial rights to small apparently useless areas of land, for which he reputedly paid in gold bullion. Before anyone realised exactly what was happening, he and his personal army marched into what is now the Usrekistahn capital building and claimed ownership of a sizeable chunk of land. He justified this action by claiming that the officials of the area were accepting bribes from “foreign powers to keep his people in poverty – to weaken the regime of the Eastern Powers and keep the West wealthy”.

This was a rallying cry for many in the area who were living in a state of near anarchy and very definite poverty. Over the past two years, Saiem has indeed brought a form of equality to his little country, and he has rapidly built a loyal and hard-working population.

Rumours of industrial build up, factories being retooled to produce arms, Uranium mining and even a biological weapons research laboratory have circulated around the UN. General Saiem denies all such accusations, and to date there has not been enough evidence to press the matter.