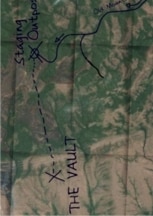 During the Cold War the Soviet Union constructed many nuclear safehouses to protect both people and valuable items in the event of full scale atomic war. After the collapse of the Soviet Union and the annexation of Usrekistahn from Sourthern Russia, General Saiem found himself in posession of one such area – The Vault.

Designed to withstand a nuclear winter and keep a portion of the physical treasures of Mother Russia safe during a nuclear firestorm, the Vault was a natural choice for Usrekistahn’s treasury. Saiem upgraded the security and began moving his hard assets in.

A rogue SPECON team intercepted one of these shipments and destroyed the underground freight railway access tunnel, this means that not only has Usrekistahn lost the ability to safely store its valuable assets, it’s also lost access to everything that was stored before the tunnel collapsed.