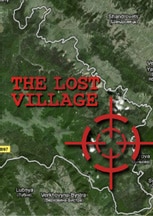 Once the site of a small rural community of no more than two dozen homes, this little village fell on hard times in the early part of the 20th Century – a fate which continued to worsen. Upon the onset of the Second World War there were only eight families living in the little village, and three of those made their way out of Poland before the Germans arrived in the area.

The war years passed relatively quietly, with nothing valuable in the community the villagers were mostly left in peace, until the arrival of Wilhem Ongle and his group in 1945.

Ongle’s associates hunted and killed the remaining villagers and went to great lengths to ensure no-one escaped the slaughter. After burying the bodies Wilhelm helped to bury five truck loads of gold ingots which he’d recently helped steal from a German holding facility.

The Lost Village was carefully chosen: the remoteness, poor reputation and lack of anything valuable in or around it would ensure that the gold remained undisturbed until Wilhelm and his conspirators returned after the war.